The Garden of Hope Foundation pointed out that Asia (as the largest continent in terms of population and land mass) is an extremely culturally and economically diverse region, with many region-specific girls’ human rights issues. Hence, the collective effort of different groups through a strategic campaign, such as the Asian Girl Campaign for Girls’ Human Rights, would be ideal to achieve the goals of effectively empowering and investing in Asian girls. The goal of the Asian Girl Campaign is to create sustainable region-wide social change by establishing a strong alliance that galvanizes the efforts of different organizations to work in long-term partnerships for the betterment of the status of girls in Asia.

The Garden of Hope Foundation shared how it started in 1988 with a half-way home to house survivors of child prostitution, and later launched a multi-year campaign to reduce child prostitution that includes media campaigns to educate the community, and a more than 15,000 participants anti-child prostitute marathon in Taipei’s red light district, which later in 1995 lead to the institution of a new piece of legislation, the Children’s and Juvenile Sexual Transaction Prevention Act (Anti-Child Prostitution Law). And since 2003, GOH has focused on empowering girls in an effort to improve the rights of Taiwanese girls through its annual Formosa Daughters’ Festival, a series of empowering activities to change the stereotypes of girls and help them make healthy choices. In 2012, GOH launched an Asian Girl Campaign for the promotion of girls’ human rights, and a total of 81 organizations and 15 countries joined the campaign. By 2013, the campaign saw the participation of 120 organizations in 20 countries.

The Garden of Hope Foundation pointed out that the sacrifice of some campaign partners to advance women and girls’ human rights is more than we can imagine! In 2012, before joining the Asian Girl Campaign as campaign partner, SAWERA’s young co-founder, Pakistani Farida Afridi, was killed by extremists. While last year, SAWERA’s office was bombed. However, the goal-oriented employees soldiered on, and continued their work, while also appealing for help from others overseas. This month on International Women’s Day, the group was honored with the Front Line Defenders Awards in Ireland, an acknowledgment of their dedication！ 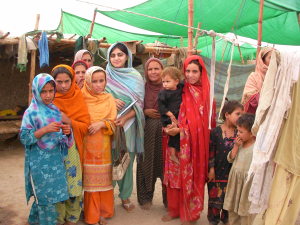 In the face of many challenges, Aware Girls’ Founder, Gulalai Ismail (Blue Scarf in Middle) has not stop promoting girls’ human rights in Pakistan.

One of the speakers at the parallel events, Aware Girls’ founder, Pakistani Gulalai Ismail, had to move her office several times as she worked in the same region. A child of a human rights activist, she was reading the Convention on the Rights of the Child and CEDAW at a young age. She says that in Northern Pakistan, less than 23% of girls are literate (i.e. able to write her own name). Her voice of clarity for the empowerment of girls and young women, in the face of difficult opposition, has won her, in 2013, the Democracy Award and Foreign Policy Magazine named her as one of the Global Thinkers.

Although less life-threatening, the works of other campaign partners are not less important for the transformation of society to better the status of girls’ human rights. In Cambodia’s SALT Academy, not only are the girls trained to become members of the first national Women’s Football Team, they are also protected from human traffickers, as well as trained to mentor other girls.

The second panel “Asian Girls Changing their World” focused on stories of empowered girls and what they do to change the world. These stories are a testament to what empowered girls can do to improve their own human rights and those of others. The parallel event also talked about how early empowerment would ensure greater impact at later age！The speakers were Chu Thi Thu Hoai, Law Student/Member of CSAGA,Vietnam；Erdenetsetseg Erdenedondog, Development Officer of PRINCESS Center for the Protection of Girls and Young Women’s Rights, Mongolia；Gulalai Ismail, Chairperson of Aware Girls, Pakistan； Mitchel Wu, Program Manager of The Asian American Student Advocacy Project (ASAP) at The Coalition for Asian American Children and Families (CACF), USA; Ying Yu Situ, Alumni of ASAP at CACF, USA; Snow Lee, International Affairs Specialist of The Garden of Hope Foundation, Taiwan; and Shulamith Koenig, Founder of PDHRE, USA.

The co-organizers of the parallel events included Pan-Pacific & South-East Asia Women’s Association (PPSEAWA) and is also co-organized with The Coalition for Asian American Children and Families (CACF).[caption