Dear VIPs, distinguished guests, representatives from the media and most important- dear girls from both Taiwan and Asia.It is a true honor for me to be here among so many outstanding young females and all the VIP’s and I welcome you to the celebration of the 1st International Day of the Girl Child. 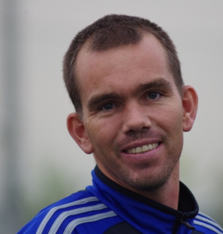 Maybe you think right now, shouldn’t there be a woman standing here on this stage since there are so many inspiring and successful women out there fighting for female empowerment and gender equality?  Looking at the program I have founded in Cambodia- the SALT Mighty Girls, I am sure that next year it will be one of them holding a speech like this.

But for today I am here and there is also a good reason for a man to open an event that celebrates the achievement of girls/women in Asia: Gender equality and female empowerment are not only about women. It’s about how I, as a man and a leader, and all those men out there look at women. It’s about the respect that we have for them. We need to change the attitude of men just as much as we need to empower girls and women. Because only together will we be able to create a just and successful society.

You might ask right now- why does this man believe in the importance of empowering and respecting girls? So please allow me to just briefly share with you my story.

In 2003 I arrived in Cambodia and started as a volunteer and teacher to be involved in many different environments. In 2006 I founded the SALT Academy that brings through the beautiful game of football life skills, leadership training and social change into the communities that are still recovering from genocide. Little attention did I give to the girls, and before my first visits to Asia I remember telling my friends that Girls Football is a waste of time. 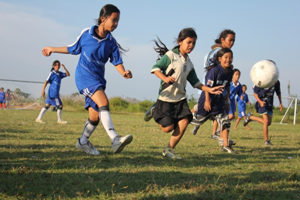 After a successful first season with lots of excited boys I raised the idea to also start a girl’s league and to promote the empowerment of girls. The response of my staff was eye-opening. Well educated and talented young men all refused to even think about it and argued that girls don’t have the right to be happy, should not waste their time with sports but help at home and be pretty so they can get married away. I then realized that I needed to do something about this and we started in 2008 our first girls’ teams. I personally stopped coaching boys and dedicated my full energy to promote girls’ football.

A year later we had a team that for the very first time represented Cambodia in a friendly game against Laos. But the small success was at risk. Literally in front of my eyes, a good player got sold to Thailand into slavery- a very common problem in our area- and I promised myself in 2010 that I would find a way to provide more than football and life skills but also shelter and education. This was the start of our program “the Mighty Girls”. These young female football players are all receiving best education, best football training in a safe environment and help as coaches to promote the benefits of football. We have in many cases helped girls to stay in school and not be trafficked, and sometimes also helped girls to reintegrate after time in Thailand. Girl’s football in our region is now accepted and the participation increased in the last year by 300% because of the role models we have- our Mighty Girls. Now over 400 girls play in our program and our team is a National Champion as well as making up 90% of the National Team.

This is my story and how I came to believe that girls should be treated equally. Not that I ever lacked the respect for girls before- but it was until I made a personal discovery of what really is going on in the world that I decided that I want to make a difference.

I hope many of you can make a personal discovery and see how the girls need our respect and support to reach their potential.

(The above is the transcript of Samuel Schweingruber’s speech for the opening ceremony of the 1st Asian Girl Campaign and 10th Formosa Daughter’s Award Ceremony in 2012.)